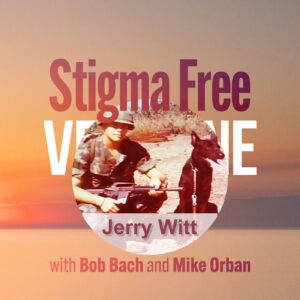 Following a year of combat with the Army’s 1st Cavalry Division, Witt returned home to a politically unsettled America. Soon he began battling feelings of guilt, anger, and confusion. He suffered through failed marriages and grieved over the pain linked to his Vietnam service.

About twenty years after his bittersweet homecoming, Jerry sought counseling from various mental health professionals. Slowly, he discovered a new sense of himself.

In this segment of the Stigma Free Vet Zone podcast, tune in to hear how today Jerry Witt celebrates his life with gratitude and hope.