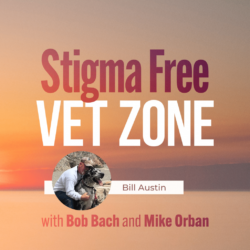 Bill Austin joins using part two to share his experience of returning home from the military after serving his country, the rollercoaster of emotions he experienced, and the struggles of sharing the intimate details of his experiences while in combat with others. He explains why he didn’t want to participate in group therapy after returning home from war and how the trauma he experienced impacted his relationships and sleep patterns. He discusses his late, beloved service dog, J.P., and how he helped Bill …

… through his PTSD treatment. Bill discusses why many combat veterans use humor as a way to cope with traumatic experiences and the challenges of tying your beliefs of patriotism and honor to the realistic aspects of war. He also shares how he realized that his PTSD symptoms and post-war trauma affected his wife and those around him and his advice to military men and women currently returning home to their loved ones.

Bill Austin served over 30 years in the military – first as a radio operator, then as an infantry man and light infantry scout in the Army before switching to the Air National Guard in 1994. While in the Air Guard, he served as a Flight Medic, helping injured and wounded colleagues on the battleground. During his 30 years of service, he earned the rank of Master Sergeant and has been deployed on multiple tours, including Grenada, Bosnia, Kosovo, Afghanistan, and Iraq. In August 2011, Bill was diagnosed with Traumatic Brain Injury (TBI) and PTSD, which resulted in being medically discharged from the Air Guard.

DISCLAIMER: The information and content shared in each episode of the Stigma Free Vet Zone are for informational purposes only. The Stigma Free Vet Zone hosts, Mike Orban & Bob Bach, are not, nor claim to be, medical doctors, psychologists, or psychiatrists and should not be held responsible for any claims, medical advice, or therapy/treatment recommendations mentioned on this podcast. Any advice mentioned or shared by Mike Orban, Bob Bach, or their guests is strictly for purposes of bringing awareness to the veteran community and the services available. Please speak with a medical professional before taking any advice or starting any therapy or treatment discussed or shared on this podcast.